IN YOUR DAILY DOSE: today is research delving into your brain’s ability to split tasks and drive and talk . . . or can it?

MAKING CHANGES: Today, making changes is all about driving carefully and reducing your risk of an accident.

FACT OR FICTION: Amelia Earhart was the first female pilot to attempt a record breaking flight. Here are a few facts you might have known.

In a study released from Linkoping University researchers discovered that your brain changes gears when you are doing something that requires sight or requires hearing. These results have given the researchers a better understanding of how your brain works.

This is one of the ways your brain screens out distractions when you have to concentrate. People who enjoy studying with music often don’t hear the words of what they’re listening to, but use the music to drown out other sounds from the environment.

This is why it’s not a good idea to talk on the phone and drive at the same time. Talking to others in the car is not as distracting because pauses in the conversation can be explained immediately and you don’t have to work as hard to split your attention.

Let’s stop using the phone while driving. It isn’t just texting and driving that’s an issue, but also having a conversation or intense discussion is challenge best left to when the wheels on the bus aren’t going round and round.

This is an easy change to make, but one you may have to work hard to accomplish. Our digital phones have become so much a part of our lives that they now look more like minicomputers than cell phones. You might not be able to do without your cell phone when parked, but when you’re driving, set it down and keep it down. 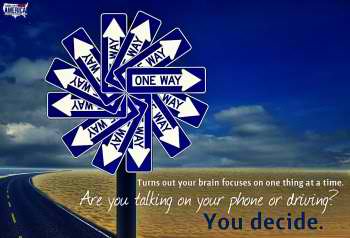 Being charitable helps me to appreciate my blessings.
Being generous to others keeps me connected to the important things in life. Sharing kindness reminds me that life is empty and hollow without it. I am conscious of how uplifted I feel when I am charitable.

Amelia Earhart was a female American aviator who was the first, and to date among the only, to receive the Air Force Distinguished Flying Cross. As a child Amelia had a vivid imagination. She invented small creatures who she often blamed for her own misadventures, such as talking out of turn or eating the last piece of candy. As an adult she was a caring friend who helped to finance a date fruit farm in Arizona for her mechanic who had contracted TB. Engaged twice and married once, her accomplishments in a plane were influential to pilots around the world.