Fall Grilling Healthier with Beer, Even for the Kids 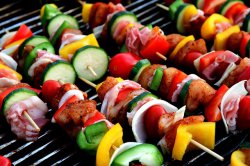 IN YOUR DAILY DOSE: researchers found using a beer marinade may reduce the carcinogenic chemicals produced in your food during grilling. Actually, in some instances it’s the high heat and not necessarily the grill that produces the chemicals.

FACT OR FICTION: Can you guess the most expensive painting?  Before you scroll down to find out - guess which one and how much.

Information from the American Chemical Society demonstrates that using beer as a marinade could reduce the number of polycyclic aromatic hydrocarbons (PAHs) produced in your food while cooking. This is good news, since grilling over high heat increases these chemicals in your food to a significant degree.

Unfortunately, PAHs are also produced from the coal, gas or wood used as fuel. When these PAHs combine with the nitrogen in the meat they produce even more dangerous nitrogenated PAHs, causing even more damage to your cells.

Grilling also increases the number of heterocyclic amines produced in the meat, another carcinogenic molecule.

Grilling your food is almost primal. People do it to cut down on the number of dishes and because it just feels good to cook over an open flame. Use some of the tips below to cut back on the dangerous chemicals you are exposed to during the process and make it a healthier meal.

1. Do not cook directly over the heat. Instead, cook on the grates away from the flames, using indirect heat.

2. Marinate your meat in beer to reduce the number of PAHs produced during cooking.

3. Don’t use a marinade high in sugar as it causes a chemical reaction creating more chemicals.

4. Trim the fat from the meat. As the fat drips into the flames or sits on the grill it creates more HCAs in your food.

5. Precooking your meat indoors will reduce the amount of time on the grill, giving you the flavor of grilling without additional chemical changes.

6. Grill fresh vegetables. They don’t suffer from the same chemical changes and help to fill you up on healthy alternatives, potentially reducing the amount of meat you eat at the meal. 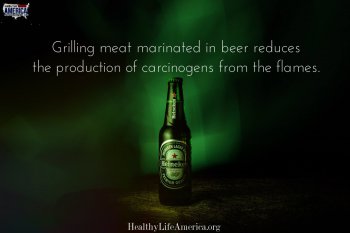 Today, I am safe and whole. I have inner balance. I recognize my ability to overcome the past and look forward to a bright future.

The Mona Lisa has the highest insurance value for a painting. The painting is on permanent display at The Louvre museum in Paris and was assessed at 100 million dollars on December 14, 1962. With inflation those dollars are now at 780 million dollars!