Initial Injury May Increase Your Risk Later in Life

IN YOUR DAILY DOSE: today is research that explains a bit more about minor head injuries and the relationship to dementia.

MAKING CHANGES: While your brain is making connections to compensate, you may want to add support that reduces your potential risk for problems later in life.

FACT OR FICTION: It is a marine creature who can blend with their environment by doing more than changing color.

Your brain is a wonderfully complex and unique structure that runs your entire body - literally from head to toe. After an injury to the brain - even a minor one- your brain begins to rewire areas to create new connections between regions.

However, this rewiring may strain your brain’s energy resources and later lead to serious problems, like Alzheimer’s disease. This enhanced connectivity is called hyperconnections, and used to create alternate routes around areas of the brain that may have been injured. Frank G. Hillary, associate professor of psychology at Penn State commented on this process in Science Daily:

"Hyperconnectivity has been called a compensatory reaction to brain injury and it's a little counterintuitive because it implies that the brain can increase its functional response when you take away physical resources. If the axon -- the physical connection -- between brain areas is removed, the brain can retain that connection functionally by using alternative routes. So what we're seeing is there are all sorts of ways in which the brain can adapt and one way is to heighten the response, but the question is what does that do for you in the short term and what are the potential secondary consequences in the long term."

"It's costly metabolically and it's costly with respect to how quickly you think. One of the primary cognitive deficits in all neurological disorders -- multiple sclerosis, traumatic brain injury, schizophrenia -- is impairments in how quickly you can think, called processing speed. In neurological disorders, processing speed diminishes and it can be related to a decrease in brain efficiency."

Doctors know that brain injuries are a risk factor for Alzheimer’s later in life, and this may be the explanation for why it happens.

Protect your head from injury by wearing sport specific headgear and seat belts while driving in your car. If you do suffer a brain injury, no matter how slight, it’s important to pay greater attention to your mitochondrial health - or the health of the minute organelles in your cells that produce energy and are at the heart of many diseases. 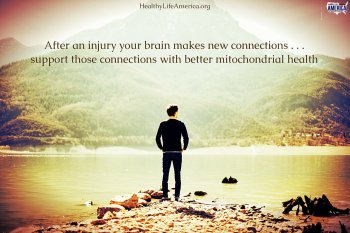 Today, I focus on the needs of others. In return, they do the same for me. So I expand my own support group as I support others. Joyfully, our network of friends becomes a circle of love.
Self-Reflection Questions:
1. How can I encourage others to feel comfortable around me, so they share their needs?
2. How can I avoid neglecting my own needs as I help others?
3. Which one of my loved ones can I reach out to help today?

Many animals and insects use mimicry or imitation to defend themselves from predators. However, this sea creature has them all beat. The mimic octopus from the Pacific ocean can impersonate other local species and predators. They can change their skin color, texture and can even take on the shape of objects and animals. At this time this species of octopus is the only marine animal able to mimic such a wide variety of animals.