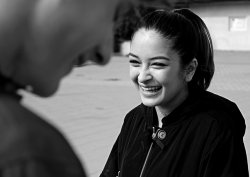 The researchers went on to share that while humor is cited as one of the most valued traits in a partner, finding someone who appreciates your sense of humor is valuable in its own right. The lead researcher describes three previous studies in which they were attempting to equate humor with intelligence, and in all three instances failed to make the connection.

What does this mean for you in your current relationships?

In the early months of your relationship with your spouse, boyfriend or girlfriend, you probably found their humor amusing and funny. But what about now? Are you taking them for granted? Do you laugh at the same jokes or find the same things funny that you did in the beginning?

According to this and other studies, we interpret attraction when others laugh at our jokes and we laugh at theirs. Are you still laughing at your partner’s humor or have you become so embroiled in the challenges and obstacles in your life that you overlook or ignore what your partner says?

While scientists can tell who we find attractive, so can our partners. When we stop laughing and enjoying a joke together, it can signal that there is something wrong at a deeper level in the relationship.

This is no reason to give up or throw in the towel! Instead, take it for what it is – a signal or indication that you are both under too much stress and need some time to reconnect. Even if that time to reconnect is out to dinner every two weeks by yourselves, or spending some quiet time with the television, magazines and work put away.

Every relationship holds individual challenges based on the two personalities in the relationship. But every relationship can benefit from a time to reconnect with each other, rediscover the reasons you’re attracted to each other and recognize the sense of humor in your partner that makes you laugh from deep within your heart.