IN YOUR DAILY DOSE: New research from the University of California has found some interesting results in new imaging studies of the brains of both men and women.

MAKING CHANGES: Knowledge of this information may help promote healthier relationships with your spouse, your boss and your children.

FACT OR FICTION: Today are 10 more firsts, more difficult than the last 10. See if you knew them and then stump your friends with the information.

You may have guessed that men and women respond differently to different stimuli, but today researchers found proof. During a study tracking blood pressure measurements using MRI imaging of the brain, researchers accidently stumbled on some very distinct differences between men and women.

Opposite responses happened in the insular cortex, the part of the brain responsible for blood pressure management, emotions and self-awareness.

This is such a critical brain area and we hadn't expected to find such strong differences between men and women's brains," said Paul Macey, the study's lead author. "This region, the front-right insula, is involved with stress and keeping heart rate and blood pressure high. It's possible the women had already activated this region because of psychological stress, so that when they did the physical test in the study, the brain region could not activate any more. However, it's also possible that this region is wired differently in men and women."

"We have always thought that the 'normal' pattern was for this right-front insula region to activate more than other areas, during a task that raises blood pressure," added Macey. "However, since most earlier studies were in men or male animals, it looks like this 'normal' response was only in men. The healthy response in women seems to be a lower right-sided activation."

The fact is, men and women react to physical and psychological stress differently. If you’ve studied the opposite sex for any amount of time you’ve already come to this conclusion. Now there is imaging proof.

The changes you make with this information depends on you. You can use this knowledge to develop greater compassion and understanding for the way your spouse, boss and children react differently to stress than you do. This will only help to improve your relationships and even your engagement with your boss. 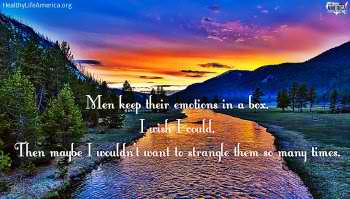 Today, I commit to being as supportive to my family and friends as they are to me. My relationships are a key part of my success and happiness.

1. In what ways can I offer support to those who are always there for me?

2. In which situations am I better off making my own decisions without advice?

3. How do I handle differences of opinion between me and my support team?

There have been many people who were first at something. However, as history marches forward, there are less opportunities of being FIRST.

1. In 1984 Joan Benoit was the first woman to win the women’s Olympic marathon.

2. In 1984 Kathryn Sullivan was the first female astronaut to walk in space.

3. In 1985 Penny Harrington became the first female chief of police in a major city - Portland Oregon

4. In 1986 Mary Lund was the first female recipient of an artificial heart.

5. In 1986 Oprah Winfrey was the first black woman to own her own television production company.

6. In 1988 Kurt Browning was the first competitive figure skater to land a quadruple jump in competition.

7. 1988 Michael Jordan was the first basketball player to be pictured on a box of Wheaties.

8. In 1990 Antonia Novella was the first woman and first Hispanic to be named Surgeon General of the U.S.

9. In 1992 Billy Crystal was the first guest on the Tonight Show when Jay Leno permanently replaced Johnny Carson.

10 In 1998 Craig Breedlove was the first person to break the sound barrier in a car with a trap speed of over 760 miles per hour.