In Your Daily Dose today is a story of a young woman who ignited the country when she decided enough was enough.  In your own life you’ll see injustice and poorly cared for people. What we do about what we see is the definition of who we are.

In the news, researchers found some very interesting benefits to learning a second language aside from communicating with others. The benefits are highly applicable to children who have cognitive development problems.

In Fact or Fiction you’ll discover the age old question to whether or not your first born child really is the smartest of the bunch!

Louise was a quiet woman, born in Alabama in 1913. Even at an early age she understood that black people were treated differently than whites. She grew up, married and helped with fund-raising for her husband’s organization. She also worked in a department store.

In 1955, at the age of 42, she was on her way home from work. Later people would attribute her actions to being physically tired, but she countered with the explanation that, “I was not old, although some people have an image of me as being old then. I was forty-two. No, the only tired I was, was tired of giving in.”

It was that historic day that Rosa Louise Parks refused to give up her seat on a bus and moved the entire country forward.

She did not set out that morning to make history. She did not intend to get arrested after work. She had not intended to ignite the civil rights movement and create an environment in which Martin Luther King Jr. would continue to shine a light on the deplorable conditions that affected half of Americans.

She did not intend to, but she did.

Rosa Parks had enough and determined in that moment to say “NO!”

She faced a nation of people who both supported her and criticized her efforts to change the status quo.

When you make a decision to change your health you may have supporters in your life and you may find that others don’t want you to change the status quo.

When you make changes in your life, it can shine a light on the deficits in other people’s lives. You won’t get support from everyone.

BUT, you are the one living your life. You experience the health effects of changing or not changing. You are responsible for your own life.

If you want to change, then find the people who will support your efforts and just get started!

In a growing global economy, where communication from one end of the earth to the other happens in seconds instead of weeks or months, learning a second language is practical and benefits businesses and individuals. Even in the United States which is largely English speaking, more than 20 percent of the population also speaks a second language.

In fact, current studies from the last three decades indicate that knowledge and thinking in two languages has a substantial impact on cognitive functioning or the way that we think, make decisions and solve problems. The power behind this knowledge appears to impact the ability of the brain to block out other distractions and remain focused on the present task.

Bilingualism appears to be a form of intervention in children raised in a lower socioeconomic status. Knowledge of two languages promotes the executive functioning of the brain and improves the behavioral test results of bilingual children over their monolingual counterparts. In other studies, bilingualism improved the clinical functioning of children diagnosed with hyperactivity disorders, or with impaired cognitive function.

Learning to think, speak and write in a second language improves the ability of your brain to execute higher function. This doesn’t mean you’re smarter, but it does mean you can make better use of more of your brain.

Although it might not interest you to learn a second language, it is something you can do slowly and with other members of your family as a fun activity to improve your appreciation of your own language and to increase your overall knowledge base.

Immersion is the best way to learn a second language. In this case you live, eat, sleep and work while only speaking that second language, often in a foreign country. Learning comes more quickly when you are doing it all day long!

However, when moving to Brazil to learn Portuguese isn’t possible, you can use software at home, take classes at the local college or community center or ask for tutoring from your bilingual friends. Through learning and incorporating new skills you can improve the executive functions of your brain and enjoy more of what life has to offer. 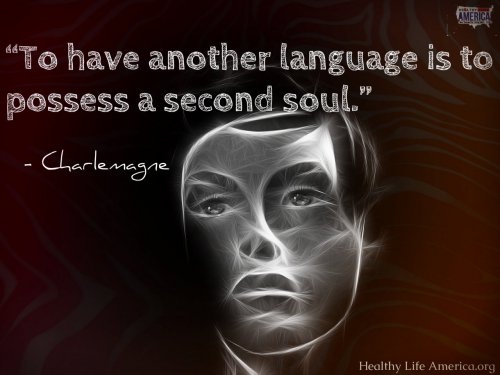 A smile says a thousand words. I receive better reception from others when I first greet them with a smile.

Where can you still become a pirate?

At MIT! Massachusetts Institute of Technology has had a 20 year underground tradition of awarding a student with the certificate of “Pirate” if they successfully complete courses in archery, pistol shooting, sailing and fencing. But in 2012 that practice became officially part of the MIT program with students receiving a parchment diploma conferring upon them the status of Pirate if they could successfully complete all four courses.